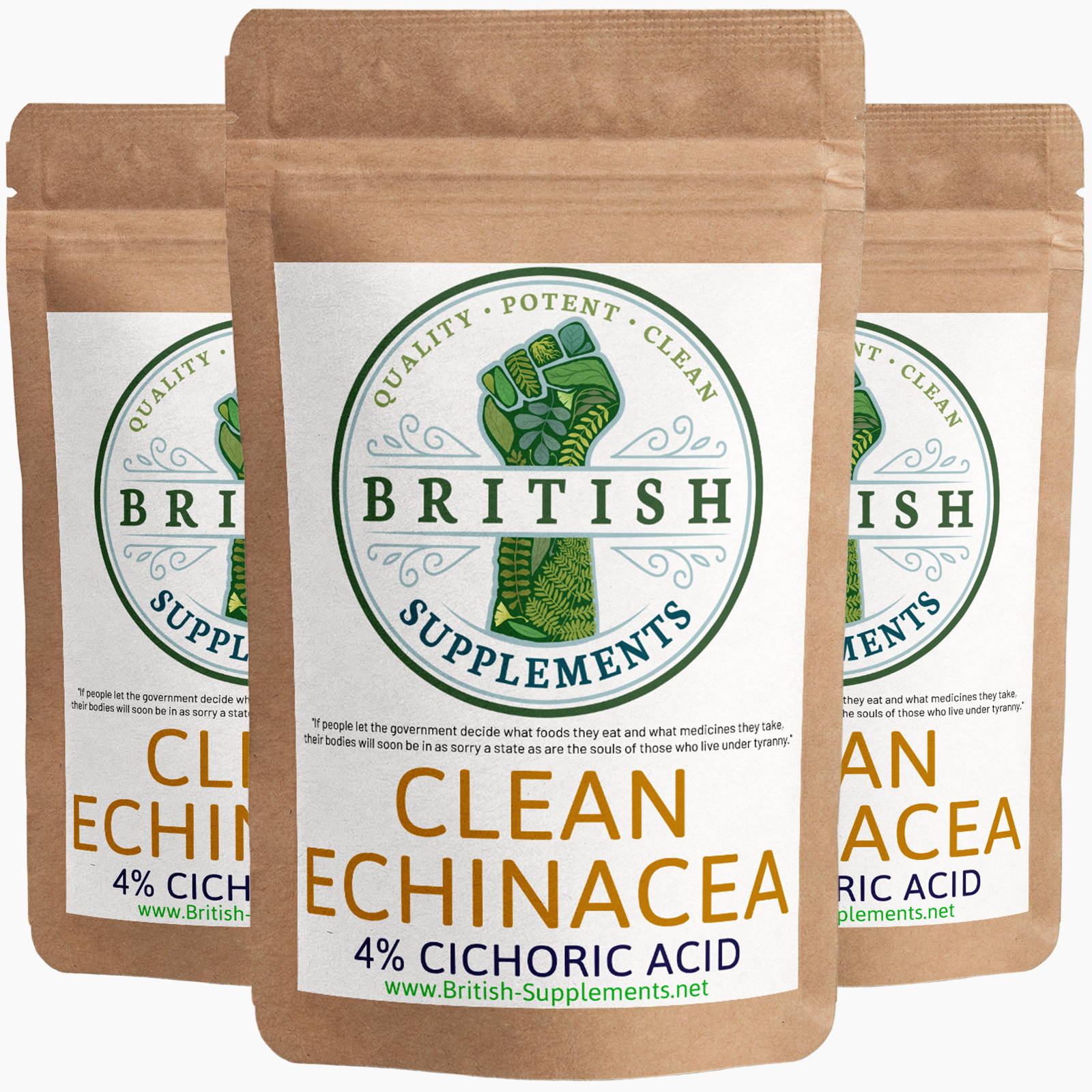 Just a quick review to say over the years Ive tried many different supplements from various sources with varying degrees of effectiveness, but since using this companies products (echinacea,various mushrooms,lungwort,schisandra) they all seem to hit the target and help with my ailments very well indeed;and although I have seen some reviews slating the attitude and prices of this company I personally can recommend the products and the attitude I really cgaf about| as long as it they keep up the high quality of the kit.

Having suffered from a compromised immune system due to a number of conditions, and having recurrent episodes of shingles, almost every month, I emailed Chris for help.
I am currently on my second month of the immune stack he recommended and I can honestly say I feel as though I'm no longer walking on eggshells waiting for the next outbreak to appear. So confident am I in British Supplements, I've ordered a stack for my failing 84 year old dad to help him with the debilitating side effects of the statins he has been on. I've actually convinced him to stop them and to believe in the natural products from BS.

I truly believe this is one of the best supplements for Autumn-Winter months. It is a second lot I have ordered and this one is for my mum who is 72. In addition to this I have been ordering Ginkgo Biloba, Lions mane, clean collagen, Vit C, Vit D, Magnesium, Chlorella etc... They all are so good! My memory has improved, my eyes are getting better (to the point where I don't need glasses anymore. After 20 years wearing them!), my skin, hair, nails are so much better looking. I used to have iron deficiency and now I am back to the normal levels. British Supplements are life changing supplements! All my Christmas presents for my family and friends will include a supplement from BS this year! I have also printed out a stack list from Chris's email and I am handing it out to everyone I know who is having any health issues. xx

Let customers speak for us

Great product, arrived on time, can't wait to make next purchase.
Thanks🙏🏽

Excellent product and very good price given you are getting 100% with no fillers and bulking agents. Getting all my supplements from here now! Thank you very much.

I feel very alert, and have an improved general feeling of focus. In addition, I have drank a less coffee as a consequence. Alongside the green tea extract, I’ve supplemented, 30 days worth of Tonga, Ali and Cordyceps. This has been a winner for me.

I was taking Clive de Carle's magnesium which are excellent but boy are they expensive - I decided to purchase Brit Supplements this time and they are pretty good for the price. I feel a definite burst of energy after taking them.

Have been taking Vitamin C along side a few other supplements from BS. Feel they have helped with boosting my immune system and feel so much better since I started using supplements from this company. A bit more expensive than from other companies but you are paying for pure products that really do work. Worth every penny, so pleased I found this company. Taking BS supplements have really improved my quality of life so much. Highly recommend.

I have full trust in these supplements to be of the highest and best clean quality. I have taken d3 + vit C as part of a wider stack for general immune support and believe they are making a positive difference. Been surrounded by ill people with various coughs colds and viruses and I have maintained my healthy balanced nature. Will absolutely always use for my herbal medicine needs.

Bought this for my hubby, started with a cough. After taking this for a few days seemed to solve the problem. I buy all my supplements from British Supplements and they never let me down. If you have a question don’t hesitate to ask they are always willing to help. Good company. Look at their stacks for information,

Thanks, brilliant service and quality shops as always

I take 2 capsules before bed and have the deepest sleep known to man, upon waking I have a black coffee with my lions mane & cordyceps to start the day it’s a life changing combo

Clean Genuine Magnesium 1,576mg
No creaking joints after one week

I take 2 x Chondroitin Sulphate and Glucosamine once a day. As soon as we get to October every previously broken bone, every old injury and now even "healthy" joints starts start to ache and creak. After a week of 2 caps once a day the creaking stopped. After 3-4 weeks all the aches were gone.

I bought this in a bit of desperation. I believe that I had caught covid in the run up to Christmas, before it was initially confirmed in the following March. My husband caught it from me and before we new it, he was in ICU, in an induced coma for 2 weeks. He had the exact same symptoms that were highlighted when covid officially 'hit'. I remember being told that he might not make it, while feeling so ill myself. Thankfully, he made it through, but since then we had both been prone to colds/flu and any chest infection going - our lungs were shot at.
I also have had problems breathing (especially through my nose) and have recently been diagnosed with severe sleep apnea and given a cpap machine which I hate with a passion - it also had been aggravating my chest.
I read some of the reviews re: Lungwort and decided me and my husband needed to try. We have only been taking under a month and the results are just amazing!!!
I am breathing 100% better than I was. My airway feels open and I am relaxed in my breathing. My husband's chest sounds so much better (the rattling has gone) and he continues to improve.
If my review can help anyone make a decision to try Lungwort - then that's fantastic!!! I would (and do) recommend to anyone x.

Just buy it, you won’t be disappointed.
The results speak for themselves, give it a month on any of the supplements they stock and you’ll wish you found the website sooner.
I wasted loads of time and money buying cheap products from big chain health shops.
I won’t be fooled again, keep up the fantastic work!
Vitamin C is by far the best I’ve had!

I’ve only been taking this magnesium supplement for a month but I already just feel a bit better. Not as crampy not as tired all the time. Can’t wait to see what another month or two brings.

Looks like even though I am super not well (that is how my boss sees me). I am still happy and able to conquer every day. Thank you